Upon returning from an outing the bottom of my trouser were covered in oil that had leaked from the oil pressure indicator button, this situation simply had to be sorted. Being unable to locate anyone that undertook the repair of these units I decided to investigate the concern. As things turned out the removal of the unit from the instrument panel of the pre 1929 cars was the thing that gave me the most trouble. The early unit  has a round front bezel that is almost impossible to grip and loosen. The unit is clamped to the instrument panel at the back with a 28mm Across Flats lock nut that is  rather difficult to reach, but once loosened only slightly the front bezel may be undone to free the unit. Then the unit is extracted behind the instrument panel for the oil pipe to be undone. On 1929 onward the unit is retained by a bezel with two screws and with those undone the unit can be withdrawn through the instrument panel and with the oil pipe undone the unit can be taken to the workbench where the oval bezel can be freed. From this point everything is the same on both units. With the unit on the bench things become simple. First the plastic button was found to be held in place with a simple cup retainer that was removed from the body by simply pulling the button outwards gently. This exposed the screwed in clamping and lever assembly. Inserting a suitable tool into the slots this was easily unscrewed exposing the sealing ring that clamps the rubber diaphragm in place. This proved a little more difficult to remove, as there was no real obvious area on which to grip and pull it out. However the sealing ring is recessed so try hooking it out with a piece of wire first, if it is well and truly stuck then try to by inserting a drift through the oil pipe hole the little brass plug was dislodged and pressure could then be applied from that side to gently drift out both the rubber diaphragm and the sealing ring. As was expected the diaphragm had hardened and distorted over the years of use which had caused the leakage. A new piece of suitable thickness (0·012″) rubber material had to be found. Happily an inexpensive and plentiful supply of suitable thickness rubber material was found at the local store in the form of their standard black rubber “Tesco Tough Gloves”. Next was how to cut this into a perfect circle of ¾” diameter to accurately fit onto the seating and to be captured by the sealing ring. Fortunately for me this is the exact size for a 12 bore shotgun wad punch and as I had just such a thing in my collection of tools it was a very simple matter to cut a new part. It was a little tricky to slide the thin rubber into it’s seating position as it was sticking to the sides but with this annoyance overcome the reassembly was simple. These oil pressure buttons frequently seem to leak and it has always been the accepted thing that a driver receives a spot of oil from this source whilst driving. With such a simple solution at hand, and with absolutely no special parts, or tools being required there is no real reason why we have to tolerate these oil drips any longer. Only time will tell if the material of the Tesco gloves lasts as long as the originals, but finding that it is such a simple thing to replace it doesn’t matter too much. 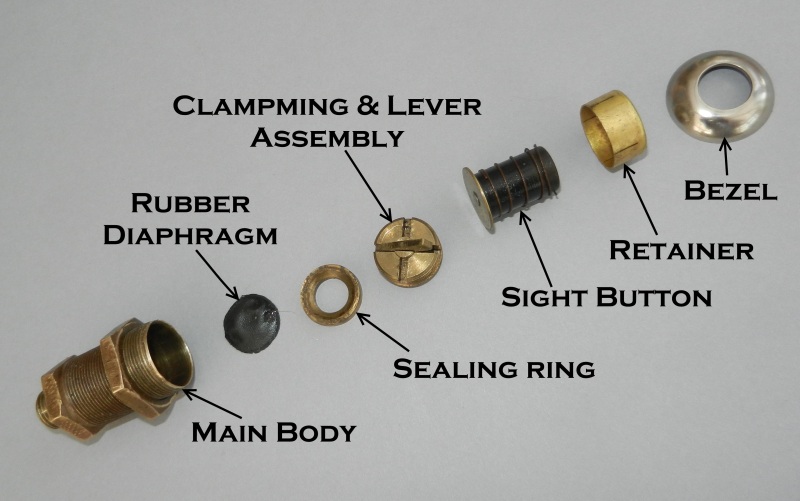